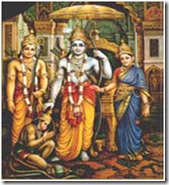 The Ramayana is one of the largest ancient epics in world literature. It consists of nearly 24000 verses divided into seven Kandas (books)  and near about 500 chapters (sargas). We look in Hindu tradition, it is considered to be the adi-kavya (first poem. It depicts the duties of relationship, portraying ideal characters like the ideal father. the ideal servant.the ideal brother, the ideal wife, and the ideal king.

Ramayana was an important influence on later Sanskrit poetry and Hindu life and culture. Like Mahavarata, Ramayana is not just a story it presents the teachings of ancient Hindu sages in narrative allegory, interspersing philosophical and ethical elements. The characters Rama, Sita, Laksmana, Bharata, Hanuman, Shatrughana and Ravana are all fundamental to  the cultural consciousness of India, Nepal, Srilanka and south-east Asian countries such as Thailand, Cambodia, Malaysia and Indonesia.

Long after Valmiki wrote Ramayana,  Tulsidas Goswami was born 16th century and wrote Ramcharitamanas in his native language. With the passage of time, Tulsi’s Ramcharitmanas, also known as Tulsi-krita Ramayana, became better known among Hindus in upper India than perhaps the Bible among the rustic population in England. As with the Bible and Shakespeare, Tulsi Ramayana’s phrases have passed into the common speech.We can look the many versions of Ramayana in Indian languages.   It consists of seven books or chapters namely Bal Kand, Ayodhya Kand, Aranya Kand, Kiskindha Kand, Sundar Kand, Lanka Kand and Uttar Kand.

Readers now collect all parts of Ram charitmanas as pdf from this page below.