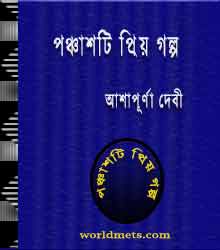 Ashapurna Devi’s birth anniversary has brought a tide, whether in the readership, or in the publishing world, that has inspired the tide of trying to renew the author, her passion for evaluating her work as a rich mineral resource has been decorated with the light of another vision.

Goddesses had a completely different feeling about writing short stories so that one weakness in her mind was that in her self-selected masterpiece, she spoke about something that was particularly remarkable.
“I have been writing continuously for almost 50 years, yet almost continuously. So even though all other writings are omitted, there is no way to mention just the number of small stories that have become numerous” – Ashupurna Devi.

The “Favorite Story” piece that was published with her 50 short stories on the birth centenary of Ashapurna Devi is truly unique. The stories are not selected in chronological order but one thing must be mentioned, among the stories “Wife and Beloved” is the first adult story of Ashapurna Devi which was published in the autumn issue in 1938.
Ashapurna Devi was an ordinary housewife. It’s been 50 years since her pen was flowing. In that gust of wind and force, the society has lost a lot of fun and the social mentality has changed. Changes have been made to eternal values. Again, in the air, the writer’s pen and language change, the form, the method of application, above all, the attitude changes.

It is not possible to discuss many of Her stories here, but it can be assured that each one is like a brilliant gem that is bound to win the reader’s heart. Although the stories may seem to the reader a little ruthless, a little rough in the intensity of the harsh truth.
Writer Ashapurna Devi was a common man of the house. But Her pen’s wandering spread across the globe to the boundaries of this house, and he received many honors and medals given by the Government of India.

‘Ashapurna Devi’, a noted Bengali novelist, writer and poet of India. She has been widely honored with many awards and awards as a female writer. In 1976, the author Ashapurna Devi was awarded the Jnanpith Award and the Padmashri by the Government of India; D.Litt. By Jabalpur, Rabindra Bharati, Burdwan and Jadavpur Universities. Visva-Bharati University honored him with Desikottama in 1989. In 1994, he received the highest honor, the Literary Academy Fellowship, in 1994 for his special contributions as a novelist and short story writer.

Through the sheer force of desire, she realized a significant place in the creative literature. The poem Veerar Dak introduced one of the most versatile creative talents in Bengali literature whose achievements include 242 novels and novels, 37 collections of short stories and 62 children’s books. He has written more than 3000 short stories.

Early in Her writing career, Ashapurna wrote only for children – Chhota Thakurdar Kashi Jatra (Great Uncle Go Goes to Varanasi) was the first printed edition published in 1938, followed by others in his literary career.

In 1936, she first wrote a story for adults, “Patni and Preoshi”, published in the Puja issue of Anandabazar. ‘Love and Production’, published in 1944, is her first novel for adults.

At the beginning of her writing life, Ashapurna wrote only for children. Little Grandfather Kashi Jatra Great Uncle Go went to Varanasi. It was the first printed edition published in 1938. Then other shots entered her literary life.
In 1936, she first wrote a story for ‘Patni and Prayasi’ adults, published in the puja number of Anandabazar magazine. Her first novel, Love and Need, was published in 1944.

Author Ashapurna Devi passed away on July 13, 1995 at the age of 86. Her famous compositions were First Promise, Subarnalata, Bakul Kotha etc.

Readers you can read and collect the book as pdf from this page.