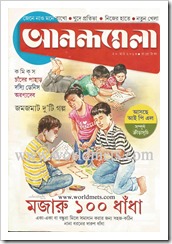 This issue’s inner stories is mainly about IPL 6 and time-table of IPL 6. He Was associated with the independence movement of India. Four Stories which is written by various writer, Four Crowdy stories, Shanku comics, chader pahar, dasshi denish and Aranya Deb is regular category etc.

Readers can collect and read online from this page.