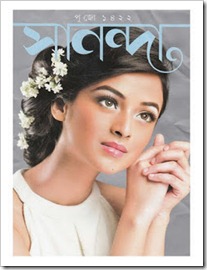 Magazine Review:
Sananda Magazine has been published from Kolkata, India. Readers this Magazine bye online or here you can view the Pujabarshiki 1422 (2015) is a special edition for Durga puja festival. It has been published by Ananda Publishers in Kolkata regional office.
The main issue of this magazine has rounded only the female purpose grounds. Now readers (Women) can view this special edition as a Bengali festival Durga Puja in Bengali version. This special issue’s and has been written in this cover stories are mainly novels and short stories, travels and interior decoration. Sananda Bengali Magazine is very popular among India, Nepal ,USA, Japan, France and Bangladesh.