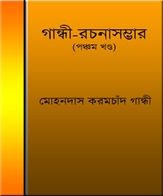 The Gandhi Rachana sambhar volume 5 is a most important part of the Indian independence movement against British rule and social revolutionary in India. Mahatma Gandhi was a great revolutionary leader and also author in India. He was one of the leader of the Indian independence movement against British rule. He was born 2nd October, 1869 at Porbandar, Gujarat and died on 30th January, 1948 in new Delhi. He was written many topics for Indian culture and  for the social reformation. He was written hues of articles. Gandhiji led India to independence and inspired movements for civil right and freedom across the world.

Gandhi’s vision of an independent India based on religious pluralism, however was challenged in the early 1940 by new Muslim nationalism which was demanding a separate Muslim homeland carved out of India.

Readers can get this book from this page given below.