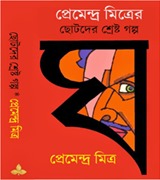 Premendra Mitra was a renewed Bengali Poet Novelist, short story and thrillers writer in Bengal. He was born on 1904 in Varanasi, India. He was a great film director. He was also Bengal’s most famous practitioner of science fiction in its own language. His critique of humanity led him to believe that for it to survive, human beings had to forget their differences and be united. He got notable awards Sahitya Akademi for his written Sagar Theke Fera in 1957. He was also awarded Rabindra Puraskar (1958). Nehru award from Soviet Russia in 1976 and Padmashree for his writings. He was died on 2nd May,1988 in Kolkata, West Bengal. He was written various types of contents are Fairy tales, Fun stories, Science fictions, ghost stories, Novels, Rhymes and  teenager stories.

Today share to you the Chotader Shrestha Galpa by Premendra Mitra as ebook PDF from this page given below.