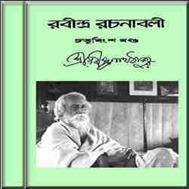 Rabindranath Tagore (Thakur) is one of the great poet in India and Worldwide also. He was born on 7th May 1861 and died on 7th August 1941. He was a great Author, musician and painter in Asia. He became the first non-European and Indian to win the Nobel Prize in Literature (Gitanjali translate into English) in 1913. His song as poetic songs were viewed as spiritual and mercurial.

He wrote many elegant prose and magical poetry. He wrote many novels, essays, short stories, travelogues, dramas and thousands of songs. He was well known mostly for his poetry.

Readers you can collect and read the Rabindra Rachanabali Vol-24 in ebook PDF from this page.