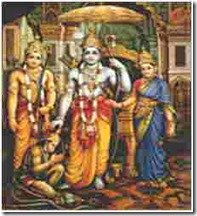 Ramcharitmanas (रामचरितमानस) all chapter as pdf:

Ramayana, considered part of Hindu Smriti, was written originally in Sanskrit by Sage Valmiki (3000 BC). Contained in 24,000 verses, this epic narrates Lord Ram of Ayodhya and his ayan (journey of life). Over a passage of time, Ramayana did not remain confined to just being a grand epic, it became a powerful symbol of India’s social and cultural fabric. For centuries, its characters represented ideal role models – Ram as an ideal man, ideal husband, ideal son and a responsible ruler; Sita as an ideal wife, ideal daughter and Laxman as an ideal brother.

Even today, the characters of Ramayana including Ravana (the enemy of the story) are fundamental to the grandeur cultural consciousness of India.

Long after Valmiki wrote Ramayana, Goswami Tulsidas (born 16th century) wrote Ramcharitamanas in his native language. With the passage of time, Tulsi’s Ramcharitmanas, also known as Ramayana of Tulsi das, became better known among Hindus in upper India than perhaps the Bible among the rustic population in England. As with the Bible and Shakespeare, Tulsi Ramayana’s phrases have passed into the common speech. Not only are his sayings proverbial: his doctrine actually forms the most powerful religious influence in present-day Hinduism; and, though he founded no school and was never known as a Guru or master, he is everywhere accepted as an authoritative guide in religion and conduct of life.

Tulsi’s Ramayana is a novel presentation of the great theme of Valmiki, but is in no sense a mere translation of the Sanskrit epic. It consists of seven books or chapters namely Bal Kanda, Ayodhya Kand, Aranya Kanda, Kiskindha Kanda, Sundar Kanda, Lanka Kanda and Uttar Kanda containing tales of King Dasaratha’s court, the birth and boyhood of Rama and his brethren, his marriage with Sita – daughter of Janaka, his voluntary exile, the result of Kaikeyi’s guile and Dasaratha’s rash vow, the dwelling together of Rama and Sita in the great central Indian forest, her abduction by Ravana, the expedition to Lanka and the overthrow of the ravisher, and the life at Ayodhya after the return of the reunited pair. Ramcharitmanas is written in pure Avadhi or Eastern Hindi, in stanzas called chaupais, broken by ‘dohas’ or couplets, with an occasional sortha and chhand.

Readers Here, you will find the text of 7th chapter of Ramcharitmanas given below.