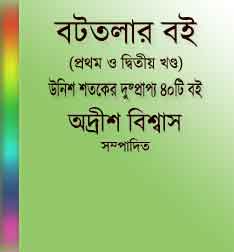 Author Adrish Biswas has edited the first and second volumes of Battalar Boi, both volumes.

There is now a wave of preservation and practice of popular literary culture around the world. For a long time there was an indifference and contempt of the upper class people towards the popular culture, so much so that many of those popular texts were not preserved. Talks are a long way off. Researchers and collectors of the time have begun to consider this popular literary culture with special importance in order to present a new kind of knowledge-practice, a picture of another society. From there came the theory of popular culture of today’s world-renowned experts, scholars, and theorists. Sometimes to get to know the minority ‘other’, sometimes to get to know the majority of the people. This theory of popularity is forcing us to consider all the popular symbols today.
The same thing happened in Bengali. The new signs that emerged after urbanization in the 19th century were the spread of education, the growth of aspirations, the expansion of the printing press, and the large number of books, large and small, some of which are known as Battalar Boi. There is a kind of indifference and ignorance that has been going on in the main stream for almost 200 years.

Major and minor, these were not kept in most libraries. There was a lack of proper preservation, tattered, untied, tainted and crumbling. Now with the interest in those books, it seems that most of them are unsuitable for preservation. Many of the books that came out of Battala were obese, with pictures and board barriers. They were considered to be preserved somewhere because of their hard-looking condition, but another type of book, with a small number of pages, thinly shaped, pinned or threaded, with a thin colored paper cover, was not preserved because of its poor appearance. Almost all of them have been lost from the Bengali society, but the typical Battala’s books meant these. Various social issues, well-known and unknown writers used to show their game in the pages of this little cut. Sometimes comedy, sometimes panchali, sometimes verse, sometimes prose, sometimes drawing. Conquered the minds of the common people of the 19th century. As a result of the increase in thousands of copies, traders saw a new market. All of these symptoms need to be reconsidered today. But often those thin typical Battalar Boi or nineteenth century social patterns are nowhere to be found.

We have never seen or come out of such a large collection of Battala books. Moreover, it must have survived before a large part was lost. The editor has tried to bring together a variety of social signs and samples of popular topics. It will provide information on the popular mentality of the nineteenth century. Today’s readers and researchers will find a realistic picture of what people liked, what they liked, what kind of arguments they made, what they didn’t like. The old spelling, misspellings and the way it came out with the grammar were presented to the readers of the time. The third bracket below the cover of each old book, the first publication date is mentioned in AD, as an editorial addition. And the editor Adrish Biswas has played a long role in popular literature and the identity of Battala.

So this compilation has been published very carefully and with great importance in all matters. The editing work of the editor will be considered successful if it is appreciated by the readers and for that purpose a PDF file of the rare book Battalar Boi has been provided on our website.

Readers can easily collect and read these books Part 1 and Part 2 from the pages of this website as they wish.
Readers are requested to leave their comments on this web page after reading this book, we will be more enterprising and enthusiastic and we will be committed to your enjoyment in the future.