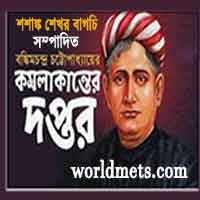 By 1873, Bankimchandra had written several major novels. Durgeshnandini, Kapalakundla, Mrinalini, Chandrasekhar, Bisabriksha etc. are his early works. Writer Pramathanath Bishi thinks that Bankimchandra’s writing was tired and he wanted a break. Then, with the responsibility of editing Bangadarshan, he had to provide some new articles to the readers every month. So he wanted to entertain the readers of Bangadarshan with his writings mixed with humorous satire. Of course, there is a partial truth in the words, but without saying a few more words, the mystery of the department cannot be reached.

The novel is an objective composition, what is described in the novel is not the author’s own word. His job is to portray the life that is portrayed in the novel. The author has to focus on preserving the flow of a story in the novel. The novelist himself is very neutral and unattached, just like the viewer, he knows or describes. Occasionally, however, he made 21 comments while describing the outside world, or his preference or favoritism towards a particular character – not just a couple of subjective statements by the author when analyzing events and characters, but broadly detailing the author’s own inner thoughts in the novel. Can’t implement. In order to defend the religion of objective art, he has to control the flow of self-heart. Bankimchandra has tried to speak for himself in the midst of the events in the novel and has often taken the opportunity to make personal comments while keeping the pace of the story. But in these cases the utterances are short – it ends with a little expression of a particular thought. The author’s psychic intentions are somewhat understandable and somewhat speculative. The novel does not have the opportunity to fully reveal the personality of the author.

But Kamalakanter Daptar is not a novel. Even if the weak side of the story can be discovered, it cannot be included in fiction like stories, novels etc.

Kamalakanta is a Niskarma Afinkhor Brahmin, Nasi Babu gives him opium. Prasanna Goalini’s cow’s milk would not have gone without this Afinkhor old Brahmin. At first glance, it may seem that these are the hallmarks of the author’s mindfulness. There is a lot of mindfulness in them, but they cannot be directly included in the essay category. They do not have the religion of the main object or the objective essay. Where is our familiar market in the big market? Where is the research on water theory in insects? The discourse among the doctors is kind and thought-provoking and a restrained philosophical theory, but it is the heartbeat of the orange-like Bankimchandra that is vibrating in the departments of our extra receipts.

Patriotic thinkers and artists like Bankimchandra were becoming more and more anxious to express their own heartfelt sentiments – he was not satisfied with the 2-4 comments he had the opportunity to make in the space of narrative description and analysis in the novel. Couldn’t even say everything.
The question here is, could Bankimchandra have written an essay without speaking Kamalakanta? Respected poet Shekhar has given an excellent answer to this question.

Essays are all ideas that can be reasonably interconnected. Bankimchandra wrote many articles on that class of thought. Much depends on the nature of the taste, which does not mean a lot of reasoning – all the thoughts that suddenly arise in the mind and disappear when you see them – the feelings that come from faith or intution – do not go into the article. Bankimchandra realized the need for a separate compositional style for them, for which he dressed himself as Kamalakanta, writing his office. The editing author has reasonably discussed and criticized Kamalakanta’s office.

In Bankimchandrer Kamalakanter Daptar, Bankimchandra discusses a lot of articles about the hypocrisy, incontinence, exaggeration and foolishness of the human world, but he is not satisfied.
Discussing the influence of English literature on Kamalakanter Daptar, Shashibhushan Dasgupta said that the influence of English literature on Bankimchandra’s Kamalakant’s office was considerable and obvious. Excluding all the similarities that exist here and there, the basic shape-nature similarity is not insignificant. Bankimchandra’s critical essays featuring satire and satire are synonymous with eighteenth-century English literary works, especially those of Edison and Steele. Spectator is the main letter in all the periodicals that were published in Edition, Steel etc. Along with this, the name similarity of Bankimchandra’s Bangadarshan magazine is also noticeable. Edison and Steele introduced a kind of satirical work in which they ridiculed the literary, social, civilizations and cultures of the time. Many of Bankimchandra’s departments are inspired by this ideology.

Author Shashankshekhar Bagchi has edited the book Bankimchandrer Kamalakanter Daptar subject to various discussions and criticisms. This book will be especially acceptable to readers and researchers.

So the PDF file of the book is given on this web page. Readers can easily collect this book from this web page and read it online.