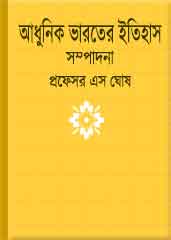 The book Adhunik Bharater Itihas (History of Modern India) has been edited by Prof. S. Ghosh. History of Modern India (1857 to 1947) is a master’s degree in modern and Islamic history. In this book, the author has beautifully described the situation of modern India, the political situation and the recent independence of the people of India, in which the current state of public life and the standard of living in India is beautifully described.
Discuss briefly, the circumstances leading to the rise of national feeling among the Indians in the second half of the nineteenth century?
The Great Revolt of 1857 marked the beginning of a new chapter in the history of India. At this time, on the one hand, the foundation of British imperialism in India became wider and stronger, on the other hand, the full development of national consciousness was seen in the minds of Indians and the foundation of national movement was laid. In fact, Indian nationalism arose as an inevitable reaction to British imperialism.

What is the first reason for the rise of nationalism?

The first reason for the rise of nationalism is that after the Great Uprising, the British Empire in India gradually took on a militant character. In the first half of the nineteenth century, the British government in India introduced a creative mindset and liberal thinking, but after the Great Uprising, the British rulers took on the role of imperialist naked exploiters. In fact, after the end of the East India Company rule in India in 1858, there was a change in the rule of British imperialism. It was at this time that industrial-centric imperialism emerged and the opportunity for British capital to freely enter India. Additional capital began to be invested in tea railways etc. As a result, India’s industrial trade was destroyed by the initiative of British capital and English manufactured goods began to be imported into India. Thus the exporting country India became the importing country. In the second half of the nineteenth century, India was transformed from a place of plunder of British trade capital into a place of complete industrial plunder.

Some other books of  Bengali literature and Indian History follows

It was in the interest of the British capitalists that the construction of railways, roads, bridges, etc., became widespread in India at this time and gradually India became the only supplier of raw materials. At this time the main objective of the British rulers in India was to take various measures to protect the interests of the British capitalists. However, the British rulers did not stop following the policy of economic exploitation only in India. They began to use Indian armies and resources to maintain and strengthen British imperialism around the world. That is to say, from this time onwards India became the main focal point of British imperialist activities worldwide.
To what extent was the British administration in the second half of the nineteenth century Orientalist?
After the Great Revolt of 1857, it became clear that maintaining the rule of a trading company in a huge empire like India was not only unreasonable but also dangerous. After the Great Rebellion, the East India Company rule in India came to an end and the British government took over the rule of India directly in 1851 under the Indian Rule Act. Although the Indian Governance Act states that the administration of India is vested in the British Parliament, due to the lack of knowledge and experience of British politicians about India, the Indian Secretary of State alone has the opportunity to exercise this power.
Despite attempts to Indianize the system of governance through various reforms, the British ruling class in India has tried to maintain its independence. The difference between the ruler and the exploited could not be forgotten for a moment. So the British always kept an eye on the Indians, whether they were members of the legislature or high-ranking government officials. Lord Mayo, a high-ranking official like the royal envoy, wrote to the Lieutenant Governor of Punjab in 1870 to teach his subordinates that we are all British gentlemen and nicknames. We are engaged in such great work. It would seem that it was futile for the people of India to expect any major constitutional change or justice as a result of the limited Indian leakage of the Constitution from the English nation in the shameless and arrogant notion of caste superiority.
In this book, the author has beautifully portrayed that image of India. There is no doubt that this book will be of special interest to the students and researchers of higher education in history.
So the PDF file of the book History of Modern India is given on this page of Worldmets website. Readers can easily collect the PDF file of the book and read it online.