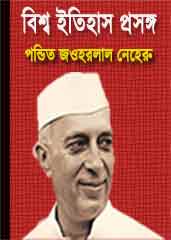 The world famous book ‘Glimpses of World History’ written by Pandit Jawaharlal Nehru is not necessary for us to try to introduce this book anew. In the three years from October 1930 to August 1933, world history was written in various prisons in India. The author was serving a life sentence for participating in India’s independence struggle and for resisting British rule in India.

During his imprisonment, Pandit Jawaharlal Nehru took the opportunity of leisure and detachment in his own language and began to write about world history. He wrote it in a letter addressed to his daughter, as he often had no opportunity to oversee her daughter’s education because of his imprisonment.

Pandit Jaharlal Nehru compiled these letters when he was given a short leave of absence before being sentenced to two years in prison for re-arrest on February 12, 1934 for treason. Then in 1934 his sister Mrs. Vijayalakshmi Pandit collected these letters and arranged for the publication of a book called World History Context.

More some other notable works of Jawaharlal Nehru.

After his release in 1936, Pandit Jawaharlal Nehru again took an active part in the political movement. Later on, he has no more responsibilities due to his busy schedule and unfortunately the pain of family separation. Then in India also the events started moving forward with intensity and speed. Great changes and groundbreaking events were observed in Europe and the world. Pandit Jawaharlal Nehru was not only a spectator of these events which were meaningful for the future civilization, he also actively participated in them. Because Pandit Nehru is one of the heroes with personality, he has combined the expansion of vision and apathy with reckless activity. During his travels in Europe, Nehru witnessed some recent developments in the Western world. He came into close contact with the struggles of China and Spain.

The current edition can be called a new book from the time of its publication. This book was slightly modified by the author. Large numbers have been rewritten and all incidental letters have been added by the end of 1938. Although he did these works outside of prison, it did not interfere with the subjective neutrality of the original composition. Rather it has been enriched with the contribution of greater experience and knowledge.

The book Bishwa Itihas Prasango (World History Context) is not just an account of events. As valuable as it is in terms of narrative, it also contains the imprint of the personality of the writer. His extraordinary mind and sentimental mind have made this history book unique. The size of the container written for the growing child was not affected. Its appeal is simple and straightforward: but the content discussion is nowhere shallow. Nowhere is the statement of the incident or the analysis of its significance overestimated.

In the three years that have passed since the publication of the last edition of Bishwa Itihas Prasanga (World History Context), many historic changes have taken place in India and in the whole world. The meaning and impact of all those changes are as vast as they are revolutionary. For those who seek inspiration and guidance from history, who feel the need to warn of history and its pre-existing consciousness, this book has become even richer and more significant in that sense and gesture.

Moreover, these events have made the author one of the best historians. He explores the significance of the course of history for us with accurate and adventurous insights. In the course of the struggle, India has gained independence and now, with that determination, is facing serious problems in a peaceful manner. He did not retire like Asa.

Pundit Jawaharlal Nehru said in the preface of the book that he did not know when and where these letters would be published or not at all. India is shaking today due to various strange events. It is difficult to talk about the future now. Yet he has written these few words. He still has time to write, maybe not later. These letters are written about history, for which a little explanation is required. While reading the letters, the reader may understand his own explanation and explanation. In particular, he said to read the last letter, maybe this book is reasonable and logical because it started to be the last chapter, because the world is now upside down.

The letters in this book have taken on a larger size in writing. He had never thought of such a large scale before he had written it. In many of these letters, he has expressed his views in very strong language, which has not changed. But by the time he began to write the letters, his views on world history had gradually changed. If he had written now, he would have written many things in a different way and in a different style. But what he once said has not been erased or re-enacted, so the letters have been published as they were.