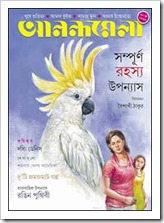 Magazine Review:
Anandamela is the most popular fortnight Child Magazine in Bengali language. Sports to science, story to comics, Adventures to Astronomy this book has it all. This Bengali Child Magazine was first published in April, 1975. Anandamela issue is fortnight edition published by Ananda Bazar Publications. This issue’s inner stories is mainly about Rabindra nath Tagore and his Literary and social reforms. He Was associated with the independence movement of India. Four Stories which is written by various writer, Four Crowdy stories, Shanku comics, Rangin Prithibi is regular category etc. Readers can take and read online from this page.