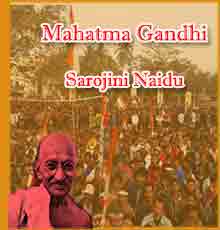 Mohandas Karamchand Gandhi – A SKETCH OF HIS LIFE AND CAREER – Sarojini Naidu.

The figure of Mohandas Karamchand Gandhi is to-day a transfigured presence in the eyes of his countrymen. Like the unveiling of some sanctuary, where the high gods sit in session, or like some romance of the soul, is his career. The loftiest ideals of conduct of which man has dreamed are in him translated into actuality. He is the latest, though not the least, of the world’s apostles. He seems forever robed investments of shining white. Infinitely gentle, to the inner ear, is his footfall upon earth. His accents have the dewy freshness of the dawn. His brows are steeped in serenity and calm. His head is crowned with the martyr’s crown.

The radiance of the light spiritual encircles his whole being. What shall it profit a man if he gain the whole world and lose his own soul ! Return good for evil. Hatred ceases not by hatred but by love. How often has humanity in its long story listened to such exhortations ! And yet how few are the souls to whom they have ever carried the waters of life ! To all men,
surely, come glimpses of the highest. At the moment they touch our being with ecstasy and fade even before they are recognised. Not so with the great Ones of earth, the elect of God. They live their lives as ever before the altar. A divine inebriation is upon them and they can know no rest till they have drained the immortal cup to the dregs. The steeps they sight they needs must climb: and far down in the valley there kneels before them an adoring host of mortals.

The spontaneous and heartfelt reverence which Mr. Gandhi’s name inspires to-day is a token that in him also India has recognised one such born priest of the ideal. The Sermon on the Mount may appear to many as gloriously impractical, but to Mr. Gandhi at least nothing is or ought to be more practical. To turn the left cheek when the right is beaten; to bless those that curse; to suffer for righteousness’ sake; these are the very ideals to which he has surrendered his whole being. And by impassioned devotion to them he has developed a character before which men stand in awe. To the self-discipline of the ascetic he adds the sweetness and simplicity of a saint. The hero’s will is in him wedded to the heart of a child. The service of man answers to the love of God. It was of such that it was said : We are the salt of the earth.
But how to write the life of such a man? How to tell the story of the soul’s development? The task is impossible. The hope’? and striving of millions fulfill themselves in a single perfected character and to that extent the common man makes the hero and the apostle. The events of the personal drama simply register the rise and fall of consciousness; their explanation is outside them. In Mr. Gandhi’s case, such a revelation came in the shape of the South African struggle. It was then that he burst upon the world as a moral force of the first order. That force itself had been long in preparing : how long who shall say? The story of that struggle with its shining roll of martyrs, both men and women, its thrilling incidents, marvelous pathos, and divine inspiration still waits for its destined chronicler. When he conies and throws it into terms of immortal literature it will assuredly take rank with the most memorable and resplendent chapters of its kind in history. It was an example and a demonstration of what one man can do by the sheer force of his character.
It was likewise a demonstration of how masses of men and women, apparently lifeless and down-trodden, can develop astounding heroism under the impulsion of a truly great and selfless leader. The work done by Mr. Gandhi in South Africa must ever be reckoned amongst the greatest things accomplished by any single man. His life prior to his emergence on
the South African stage was comparatively uneventful except for one or two glimpses of the coming greatness.
Mohandas Karamchand Gandhi was born on the 2nd of October 1869, the youngest of three children in a Vaishya family, at Porbandar, a city of Kathiawar in Gujarat. Courage, administrative capacity, and piety were hereditary in the family. His immediate ancestors were in their way quite remarkable. His grand-father was Dewan of the Rana of Porbandar, and an incident recorded of him.

shows what a fearless nature he had. Incurring the displeasure of the Queen who was acting as Regent for her son, he had actually to flee the Court of Porbandar and take refuge with the Nawab of Junagadh who received him
with great kindness. The courtiers of the Nawab observed and remarked that the ex- Dewan of Porbandar gave his salute to the Nawab with his left hand in outrage of all convention. But the intrepid man replied, “Inspite of all that I have suffered I keep my right hand for Porbander still. “Mr Gandhi’s father was no less distinguished. Succeeding his father as Dewan of Porbandar and losing like him the favour of the Raling Chief, he repaired to Rajkot where he was entertained as Dewan. Here he rose rapidly in favour
and such was the high regard which the Thakore Saheb of Rajkot came to have for him that he (theThakore Saheb) pressed his minister to accept a large grant of land in token of his esteem. But wealth had no attractions for him, and at first he declined the generous offer.
Even when the entreaties of friends and relatives prevailed at last it was only a fraction of what was offered that he could be persuaded to accept. Even more interesting is another incident told of him. Happening to hear one day the Assistant Political Agent hold abusive language regarding the Thakore Sahib, he indignantly repudiated it. His Omnipotence the Political Agent demanded an apology which was stoutly refused. To rehabilitate
his dignity the Assistant Political Agent thereupon ordered the offending Dewan to be arrested and detained under a tree for some hours! The apology was eventually waived and a reconciliation effected. Comment is needless. Mr. Gandhi’s father was also a man of severe piety and could repeat the Baghavad Gita from end to end. His mother, however, was the most remarkable of all. Her influence on the character of her son has been profound and ineffable. Religion was the breath of her life. Long and rigorous were her fasts; many and lavish were her charities; and never could she brook to see a starving soul in her neighborhood. Though in these respects she was typical of the Hindu woman, yet one feels that there must have been something unique about her. How else could she have been the mother of a Gandhi? Tn a home presided over by such a mother was his childhood passed. He was duly put to school at Porbandar but a change occurring in its fortunes the whole family removed to Rajkot. Here the boy studied at first in a Vernacular school, and afterwards in the Kathiawar High School, whence he passed the matriculation examination at the age of seventeen. It may here be said that Mr. Gandhi was married as a boy of twelve to the noble soul who is now his partner in life and the glorified participator in all his sufferings and struggles. An incident in his school life deserves more than ordinary mention. Born and bred in an atmosphere of uncompromising Vaishnavism, he had learned to perfection its ritual and
worship, if not also to some extent, its rationale and doctrine. The principle of Ahimsa, non-killing (non-resistance to evil generally), is one of the keynotes of this teaching and Vaishnavas are, as a rule, strict vegetarians. But those were the days when even a schoolboy unconsciously imbibed a contempt for religion in general and for the ways of his forefathers in particular.

The great leader Mr. M.K.Gandhi seems to have been no exception to this rule. Truth to say, the young Gandhi became a veritable sceptic even at the stage of his school career. This wreck of faith brought one disastrous consequence in its train. He and some school-companions of his came sincerely to believe that vegetarianism was a folly and superstition, and that to be civilised, the eating of flesh was essential. Nor were the boys slow to put their belief into action. Buying some flesh in secret every evening, they went to a secluded spot on the bank of a stream, cooked it and made a convivial meal. But Mr. Gandhi’s conscience was all the while never at peace-At home he had to tell lies to excuse his lack of appetite and one subterfuge led to another. The boy loved truth and hated falsehood, and simply to avoid telling lies he abjured flesh-eating for ever. Truly the boy is father of the man!

Readers can collect and read this valuable book from this page.