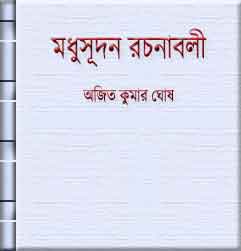 Bankim Chandra Chattopadhyay, the famous poet of Bengal, while paying homage to the poet Madhusudan Dutta, said about him that it is the good fortune of Bengal that a famous poet like Madhusudan was born in this country. He has gained immortality in Bengali literature by drinking the nectar desired by Yash.
In the middle of the nineteenth century, the national mood of the Bengalis was completely changed due to the influence of Western education. The slavery of irrational conduct, the stupidity of religious reform and the narrow and subjugated sense of life seemed to keep our national life in a light-airless prison. Western education and ideology freed the captive national life from that prison into the boundless world of unobstructed light. The knowledge of English education awakened our vision at the touch of a spear, awakened a relaxed intellect and an independent judgment, struck at random dependent inertia and inactive black-mind and intoxicated it with full confidence and indomitable zeal.
In the shock of the Western ideology, the Bengali people of the nineteenth century became inspired by the all-encompassing spirit of liberation along with the Western imitators. A consciousness emerged as a major force in all personal, class and national spheres. The spirit of liberation was inevitably associated with formidable masculinity and formidable strength. The horrible steps of a terrifying life, the shattered attitude of a seedless personality, and the immense humiliation of a relentless humanity that had already been seen, vanished like the gloomy nightmares of a bygone night. In the golden light of the new dawn we saw the impenetrable idol of a newly risen nation – like an idol coming out of an ancient epic. His vision is hard in the determination to do the difficult and his chest is harder than lightning when it comes to gaining the impossible. We saw in literature the great sorrow and great tragedy of that arrogant, inconsistent power, the tragic defeat, the immense waste of unbridled effort, the sudden fall of the astronaut meteor.

Poet Madhusudan Dutta created an unprecedented stir in Bengali literature through his writings.
Madhusudan’s mindfulness was like the rays of the midday sun but his heart and soul were as soft and sweet as the full moon.
While Madhusudan Dutta was in Billet, Goldstocker, a unique scholar of Oriental studies, was fascinated by his scholarship and urged him to take up the post of unpaid professor at the University of London. Not only did he acquire an outstanding knowledge of the various languages ​​and literature of the world, but his influence on literary theory and the theoretical insights into literary judgment were to be recognized. Madhusudan is a shining example of how impossible it is to combine knowledge with each time.
He was born with an extraordinary talent by divine grace and mastered the treasure of knowledge by his unparalleled hard work and perseverance. Throughout his life he has achieved on the one hand and created on the other. He has consistently applied his acquired knowledge to his creations, but the originality and natural consistency and beauty of that creation have not been compromised anywhere.
That is to say, any theory and practice, when it has been absorbed by its own way and digested by juice, has no longer maintained its distinctiveness and dissimilarity. That is why in spite of the presence of many local and foreign literary elements in his literature, their existence is never felt. He brought new resources to Bengali literature and experimented with new forms and styles, but nowhere did he forget to adapt to the Bengali language and literature’s own style and resources. He has spoken much of foreign poets and playwrights and has not shown much respect for local literature except for fourteen-line poems. But what he said in his mouth, his creative talent did not comply everywhere. That talent has come to the forefront of Sanskrit and Bengali literature in the selection of stories and the application of language ornaments as required. Madhusudan is a strict rule in the field of literature no matter how much he is taxed in his life, so he is so aware of the form of literature. Discussing the nature and application of these various metaphors, one can get a clear idea of ​​Madhusudans mentality and poetic religion.
Michael Madhusudan made his debut in Bengali literature as a playwright. He had translated some famous Sanskrit plays before Sharmistha Natak, such as Bhadrarjuna, Kirtibilas, Kulinkul Sarvasva, Widow Marriage Natak etc.

Ajit Kumar Ghosh has edited this Madhusudan Rachanabali with the story and various compositions of his famous Chaturdasapadi Kavita Prachin Purana. So this book will be welcomed by the readers. Hopefully, we have given the PDF file of Madhusudan Essays on this web page.

Readers can read and collect the book from this page.