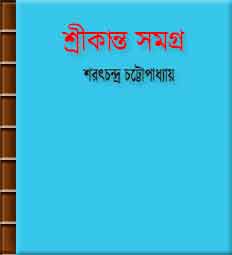 Sarat Chandra Chattopadhyay has written the famous novel Shrikanta Samagra (complete Shrikanta). He was one of the best writers of Bengali literature. He was born on 15th September 1876 in the village of Debanandapur in Hooghly district to an ordinary poor Brahmin family.

His teenage and first life was spent at his uncle’s house in Bhagalpur. When Saratchandra was five years old, his father Matilal Chattopadhyay enrolled him in the Pari Pandit School of Debanandapur, where he studied for two or three years, while his uncle enrolled him in the Durgacharan Boys’ School in Bhagalpur. In 1887 he was admitted to Bhagalpur Zilla School, but when his father left his job there he was forced to return to Debanandapur, forcing him to drop out of school there and after coming to Bengal he was admitted to Hooghly Branch School, He had to leave the school because he could not pay.

He then concentrated on writing literature and during this time he wrote novels like Baradidi, Devdas, Chandranath, Shubhada etc. and wrote stories like Anupama Prem, Alo O Chhaya, Bojha, Haricharan etc. After his short novel Bardidi was published in Bharati magazine, Saratchandra’s novel Bardidi became popular among the readers and critics in various circles of Bengali literature and gained popularity among the readers with incredible speed.

Later when the novel Charitrahin (Characterless) was published in book form. In one day, a book of characterless novels sold 400 copies, which was no other record in Bengali literature at that time. While in Rangoon, he wrote novels like Ram’s Sumati, Path-Nirdesh, Bindu’s Son, The Value of Women, Characterless etc.

After that, He did not have to look back. Enlightened by the light of Bengali literature, he created a stir in Bengali literature all over India. Some of his novels and stories have been published directly in the bibliography, such as ‘The Daughter of Bamun’ and the last question. During this time he wrote stories and novels like Biraj-Bau, Pandit Mshai, Will of Vaikuntha, Mej-Didi, Pallisamaj, Arakshaniya, Niskriti, Grihadah, Denapaona, Navavidhan, Mahesh, Pather Dabi, Last Question etc. In a very short period of time he became such a popular and immortal creation in Bengali literature which is a rare example in Bengali literature.

Sarat Ch Chattopadhyay was not just a singer-songwriter, an actor or he was just a novice in literary writing. We see him in society as a social reformer, a benefactor, a humanist, a physician. Even when he saw the misery of an animal, tears flowed from his eyes. In a patriarchal society, he was more towards women than men. Again, he was humiliated by the cruel oppression of the society and his compassion towards every woman was immense. He was a very hospitable friend and his wife and lover were not luxurious, but he was a bit fancy, especially in costumes and writing. He could talk a lot in private meetings. It has always been one of his duties to treat the ailments of the poor. When he saw a patient, he not only gave him medicine but also bought food for many. At that time, Saratchandra used to help many needy families in the Samataber area, especially orphan girls, with their monthly stipend.

At that time, when the non-cooperation movement started in 1921, he joined the Congress at the call of Deshbandhu Chittaranjan Das and he joined the Howrah District Congress. He was the President of Howrah District Congress for a long period of 16 years from 1921 to 1930.
Although Sarat Chandra Chattopadhyay was a minor leader of the Non-Violent Congress, he was always in touch with the armed struggle of the Indian liberation movement or the terrorist revolutionaries. He had a deep heart with the famous revolutionaries Hemchandra Ghosh, revolutionary Barin Ghosh, Upen Bandyopadhyay, Amarendra Chattopadhyay and Bipin Gangu.

During this time he built a house at Baliganj in Calcutta from Samataber in 1934. The house has two floors and is very beautiful to look at. Since then his address has been 24 Ashwini Dutta Road.
In 1936, Saratchandra was awarded the title of Dilit by the University of Dhaka and the Jagattarini Medal by the University of Calcutta. Later, Calcutta University once appointed him as a questioner in the BA examination. At that time he was welcomed by various literary councils and was adorned as the literary emperor.

The book Srikanta Samagra contains his own hand-painted illustrations and 4 part of Srikanta (Complete Shrikanta) novels with short biographies.

There is no doubt that this book Srikanta Samagra (Complete Shrikanta) composed of his famous novels and stories will be appreciated by the readers. Therefore, for the convenience of the readers, a PDF file of the book Complete Shrikanta has been provided on our website. You can easily collect the book and read it as you wish.

Below is the link to the PDF file of the book Complete Shrikanta.