Aphorisms on Love by Vatsyayan PDF 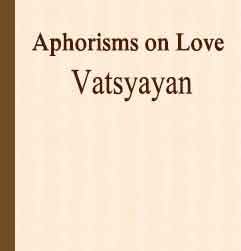 The Aphorisms on Love written by Vatsyayan.

The Aphorisms on Love ancient romantic novel by Vatsyayan, contains about one thousand two hundred and fifty slokas or verses, and are divided into parts, parts into chapters, and chapters into paragraphs. The whole consists of seven parts, thirty-six chapters, and sixty-four paragraphs.

It may be interesting to some persons to learn how it came about that Vatsyayan was first brought to light and translated into the english language. It happened thus. While translating with the pundits the Anunga runga, or the stage of love, reference was frequently found to be made to one Vatsya. The sage Vatsya was of this opinion, or of that opinion. The sage Vatsya said this, and so on. Naturally questions were asked who the sage was, and the pundits replied that Vatsya was the author of the standard work on love in Sanskrit literature, that no Sanskrit library was complete without his work, and that it was most difficult now to obtain in its entire state. The copy of the manuscript obtained in Bombay was defective, and so the pundits wrote to Benares, Calcutta and Joypur for copies of the manuscript from Sanskrit libraries in those places. Copies having been obtained, they were then compared with each other, and with the aid of a Commentary called Jayamangla a revised copy of the entire manuscript was prepared, and from this copy the English translation was made.

The following is the certificate of the Chief Pandit –

The accompanying manuscript is corrected by me after comparing four different copies of the work. I had the assistance of a Commentary called Jayamangla for correcting the portion in the first five parts, but found great difficulty in correcting the remaining portion, because, with the exception of one copy there of which was tolerably correct, all the other copies I had were far too incorrect, However, I took that portion as correct in which the majority of the copies agreed with each other.

The Aphorisms on Love by Vatsyayan, contains about one thousand two hundred and fifty slokas or verses, and are divided into parts, parts into chapters, and chapters into paragraphs. The whole consists of seven parts, thirty-six chapters, and sixty-four paragraphs. Hardly anything is known about the author. His real name is supposed to be Mallinaga or Mrillana, Vatsyayan being his family name. At the close of the work this is what he writes about himself

It is impossible to fix the exact date either of the life of Vatsyayan or of his work. It is supposed that he must have lived between the first and the sixth centuries of the Christian era, on the following grounds:— He mentions that Satkarni Srtvahan, a king of Kuntal, killed Malayevati his wife with an instrument called kartari by striking her in the passion of love, and Vatsya quotes this case to warn people of the danger arising from some old customs of striking women when under the influence of this passion. Now this king of Kuntal is believed to have lived and reigned during the first century A.C., and consequently Vatsya must have lived after him. On the other hand, Virahamihira, in the eighteenth chapter of his Brihatsanhita treats of the science of love, and appears to have borrowed largely from Vatsyayana on the subject. Now Virahamihira is said to have lived during the sixth century A.D. and as Vatsya must have written his works previously, therefore not earlier than the first century, A.C. and not later than the sixth century A.D., must be considered as the approximate date of his existence.

On the text of the Aphorisms on Love by Vatsyayan, only two commentaries have been found. One called Jayamangla or Sutrabashya and the other Sutra vritti. The date of the Jayamangla is fixed between the tenth and thirteenth centuries A.D., because while treating of the sixty-four arts an example is taken from the Kávyaprakásha which was written about the tenth century A.D. Again, the copy of the commentary procured was evidently a transcript of a manuscript which once had a place in the library of a Chaulukyan king named Vishaladeva, a fact elicited from the following sentence at the end of it:—

Here ends the part relating to the art of love in the commentary on the Vatsyayan a copy from the library of the king of kings, Vishaladeva, who was a powerful hero, as it were a second Arjuna, and head jewel of the Chaulukya family.

A complete translation of the original work now follows. It has been prepared in complete accordance with the text of the manuscript, and is given, without further comments, as made from it.

Readers can read online or collect from this page.

Aphorisms on Love of by Vatsyayan PDF.