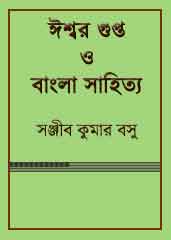 The book Ishwar Gupta O Bangla Sahitya is written by author Sanjib Kumar Basu. Ishwar Gupta was a prominent poet, writer and author of Bengali literature. The nature of Bangladesh is the land of poets. Bengali is the land of the thinker’s country lover. This poetic love, thoughtfulness and love of the Bengalis on the one hand has enriched and enriched the culture of Bengal and on the other hand has also given birth to some evils. This extravagance of Bengalis has made Bengalis sometimes self-forgetful, sometimes culture-loving-deviant.
Attempts to get to know and understand the poet Ishwar Gupta have not gone unnoticed in this country, but they have not been as extensive as expected. One of the reasons for this may be that Ishwar Gupta, the young poet of the nineteenth century, who was partly the pioneer of the group, was the one who changed the reading tastes of Bengali poetry. Although the times of Madhusudan Dutta, Hemchandra and Navinchandra were in the immediate future of Ishwar Gupta, their ideals were different.
At the time of his birth and life expectancy, the poet Ishwar Chandra Gupta was very close to his predecessor, the pious poet Ramprasad Sen. Both the poets belonged to the district of 24 Parganas in terms of place of birth and environment.
In the nineteenth century, the direct and indirect influence of the God-secret poet can be seen in the pursuit of many of the literary chariots who have attracted the attention of the readers by displaying their artistic prowess in the wide premises of Bengali literature. Ishwar Chandra was such a skilled artist of literature as a skilled goldsmith who introduced the art of making ornaments by mixing some coper (khad) with pure gold. There is no doubt that there were some spheres in his own creation, but the rest of his literature shines like pure gold, except for a little rurality and obscenity. His creative technique has gained special impetus in another field – that is, the poet himself has smoothed, softened and beautified the impassable and friendly path of the development of many literary geniuses of the next age. He has led the pursuit of many writers, young and old, on the path to success and has inspired them.
That is why Ishwar Gupta’s place in Bengali literature is special and meaningful.
Today we see that Kolkata is the green land of Bengali literature. Everyone says that Kolkata is the heart of culture, one day the culture of this city of Calcutta has become a movement manifested in the divine ideology. The social life of the Bengalis was in a state of chaos in the life of the nation at that time.
Poet Ishwar Chandra is a poet of a young age. Bankim Chandra wrote, looking at today’s fancy and beautiful Bengali literature on the way to development, many times it may be beautiful, but this is the next one – not ours.

The poet Ishwar Gupta is the only poet who has bridged the gap between the old and the new prophets. His emergence in Bengali literature is therefore of special significance as he is the latest representative of the ancient age to be the new butterfly in the new age evolutionist allegation scheme. Ishwar Gupta lived from 1882 AD to 1859 AD. To know this God Gupta, to understand, one must know his personal life. He will be known only if he knows the joys and sorrows, hopes, aspirations, joys and sorrows of his life. In his personal life, the poet has received special sorrow. He has received sympathy, respect and justice from the society of injustice. In the sense of his satire or satire, therefore, this life is reminiscent of luxury disgust, intense anguish, and sometimes one of the brightest astrological poets of the medieval poetry-sky. He did not get such haraam luxuries and pleasures in his life. He has been plagued by the scourge of poverty from time to time. People have been suffering from childhood misery since they were engaged in their own endeavors. Although he suffered a lot in life, that feeling of suffering in the world could not make his poetic mind dry or inactive. That is why he has written one after the other, a unique burning flame of Bengali literature. Which the reader must take to heart.
Author Sanjib Kumar Bose has described Ishwar Gupta as being beautiful in this book, so if you want to know Ishwar Gupta, you must read this book.
Readers can easily collect the PDF file of the book Ishwar Gupta O Bangla Sahitya from this page and read it online.