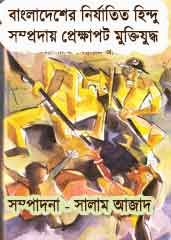 Author Salam Azad has published several books in the past. Why the Hindu community is leaving the country, peace forces and peace treaty and one more novel he wrote. The author of this book has told the story of inhuman oppression and barbarism against the Hindu minority in Bangladesh in a way that no one else has ever had the ability or the courage to tell.
In the introduction to the book, he says that some extremist people of that country had a beautiful two-storied wooden house in the house of Ambikacharan Saha. Such a beautiful house he had never seen before. Not only this house but the whole house was looted on that day.

The owners of the house are called Ambikacharan Saha. This might not have happened if it had been Muhammad Alucharan.
The people of Bangladesh, especially the Hindus, were severely affected by the war of 1971. At that time the Pak invaders burnt down many houses of the Hindus and the local greedy Muslims without any delay looted the furniture, gold grains, money and even the fruits and vegetables of the trees, domesticated poultry, cows and goats. The editor of the book saw the image of Maizpara and Radikhal with his own eyes. Witnessing a schoolboy in 1971 and expressing that grief today.
But it was not an isolated incident. In 1971, the Pak aggressors carried out the most barbaric and inhumane treatment of women in every Hindu house in every village or town of Bangladesh. This is the story of a family in Maijpara. It’s about a family in a very old house. It was about 400 years old, the manor house. Pakistani soldiers sprayed gunpowder on the house and set it on fire, and all the family members escaped, but when they returned home, there was not even a cup of tea left. I had to quench my thirst for water with the mug used in the toilet.
At that time there were images of extreme attacks on Hindu men and women and the most barbaric atrocities, the cries of tortured and raped women and men. Hindu men and women have been the most persecuted due to the religious identity of Bangladesh’s war of independence. The publisher of this book was interviewed by the editor at the time of the torture and was assisted by some of his best friends.
He further said that a special chapter in the history of our war of independence was the brutality of Pakistanis against Hindu men, women and children due to religious beliefs. One more thing beyond this has compelled me to formulate the present work.

But what is that?

One of the great expectations of the Hindu people was to make it clear that their only expectation was that they would be discriminated against during the 23 years of Pakistan’s rule, that they would be subjected to torture and ill-treatment, and that black law would be imposed on them in the name of enemy property. Government of Pakistan, get rid of it.
But those expectations were not met. Discriminatory laws like the Enemy Property Act have not been repealed. The Hindus of Bangladesh in their homeland have remained enemies to the majority community till date. The state has made them enemies. Democracy and secularism have not only been abolished from the constitution but the state religion Islam has also deprived the civil rights of Hindus in Bangladesh. They have been turned into second class citizens which is against the spirit of liberation war.
After independence, Bangabandhu Sheikh Mujibur’s three-and-a-half year government and Bangabandhu Sheikh Mujibur Rahman’s daughter Sheikh Hasina’s government from 1996 to 2001, the religious and ethnic minorities of Bangladesh, especially Hindus, have come to think of themselves as their own government. These two governments were trying to provide security to the minorities of the country so that the minorities could feel safe.
For those who are reluctant to acknowledge their contribution and role in the liberation war by sending the spirit of liberation war into exile, every word of this book will hurt the conscience of every Hindu man and woman who have to pay for their contribution in liberation war. This is the editor’s main expectation. And in the war of liberation Hindu men and women will get recognition for their sacrifice. They will get back their civil rights and religious freedom in their own country.

Therefore, there is no doubt that the book will be considered as a special book to the readers, so the book is given as a PDF file on this web page. Readers can easily collect PDF files of this book and read it online.