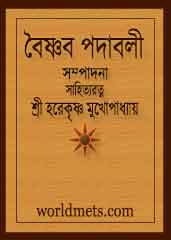 Vaishnava Padabali is a book written by various famous writers and edited by Sahityaratna Sri Harekrishna Mukherjee and published from Calcutta.
Vaishnava Padabali are the richest medieval literature of Bengali literature. These verses can be considered as objects of pride in comparison to the lyric poems of the fifteenth, sixteenth and seventeenth centuries of any literature of the world in their richness of thought and subtlety, in their elegance and variety of expression.

Some other notable works in Vaishnava Padabali by Various Authors.

In this case Vaishnavism has a remarkable feature as compared to other literary lyric poems. The lyric poetry of other literatures is only the content of literature. Literary people in particular deserve to taste it, but there are many aspects to the widespread popularity of Bengali Vaishnavism. There has been a remarkable combination of religious conversion and literary terms in these terms. Just as the exquisite literature of higher makes a profound appeal to the practiced mind, so the awakening of a spiritualism through a thrill enriches and refines its taste. To the Vaishnava devotees of Bengal, these verses are again a recourse to spiritual practice, and Leela Kirtan is a part of Vaishnava practice. From both the religious and literary aspects, Vaishnava texts have spread a social legacy among the masses in all walks of life in Bangladesh. This is why, in the highest educational institutions of Bengal, as well as in judging, analyzing and tasting these phrases and literature among the intellectuals of Sukshruchi, and also in the numerous temple premises of Bengal, its Sotsuk reception – served in the fields and ghats of Bengal by people from all walks of life. In this way Vaishnavism has gained a wide popularity among the people of Bengal.

Such a wide popularity of Vaishnava texts made the author enthusiastic about publishing a complete collection of verses. Compiled and edited by Satish Chandra Roy and published in 5 volumes by Bangiya Sahitya Parishad, Padakalpatarui was recognized and admired in modern times as an anthology of Vaishnava texts. After this, there is no doubt that the author met the need of ‘Padamrita Madhuri’ compiled in four volumes by Professor Shri Khagendranath Mitra. A total of 3756 terms have been collected in this compilation. In this book, there is a facility to get the posts of more than two hundred Padakartas together, and the readers will not have any difficulty in judging or tasting as their posts are arranged in phases. The publisher believes that this chronological arrangement will help in observing the evolutionary trend of verse-literature, as well as in observing the characteristics of each verse. A slightly incomprehensible term has been explained in Bengali. Where it does not seem necessary to explain the whole verse, the necessary part has been annotated.

We believe that the alphabetical word in the appendix of the book, along with the meaning of the difficult word, will help the reader and the singer to understand and appreciate the meaning. So the PDF file of that book is given on this web page. Readers can easily read the song by collecting the PDF file of this precious book.

Readers can easily read the song by collecting the PDF file of this precious book.